With a range of innovative products and technical knowledge, Aussie Trenchless’ impact on the industry grows larger with time.

Characterised by its ease of use and speedy installation process, Aussie Trenchless SRP EXP can extend the service life of sewer and stormwater assets by more than five decades. The relining product – available for asset profiles from DN 150 to DN 1200 – is a close fit structural spiral ribbed PVC relining system for circular sewer and stormwater gravity pipelines.

Rather than acting as a one-trick pony, Aussie Trenchless has a few more stallions in its stable, including its Pipe Segment Technology (PST), used for the rehabilitation of gravity sewer mains. The man entry lining system has proven to be quite popular in the industry and uses transparent polypropylene lining panels, which are suited to a tight location.

Another popular product provided by Aussie Trenchless is the Hot Sleeve Heating Jacket, used to induce a speedy resin cure during patch and seal lining activities.

Since first exporting its SRP EXP Spiral Liner in 2017, demand for the Aussie Trenchless product in South America has continued to grow.

In 2018, Aussie Trenchless shipped 15,000 lineal metres of SRP EXP to South America, where its E9-085-6 profile system is currently being used to rehabilitate sewer pipeline networks ranging in size from DN 300 to DN 400. Since the initial shipment, interest in the product has continued to grow.

“This is the second shipment to the same customer, which I am delighted about as repeat orders confirm the user friendliness and quality of the profile.” 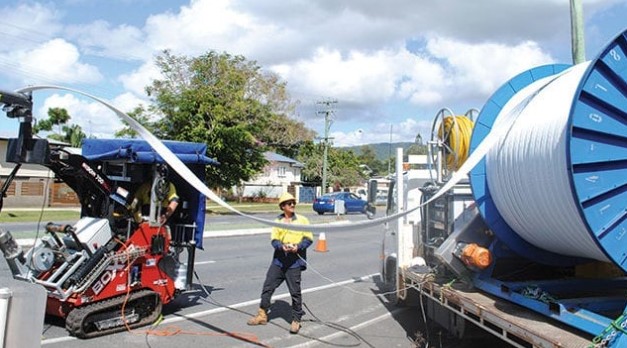 Aussie Trenchless has continued to grow its position as an industry pioneer, not only in its home country, but across the world.

Its most popular product, the SRP EXP, is a close-fitting structural spiral ribbed PVC trenchless pipe lining system used in circular sewer and stormwater gravity mains. It is available for assets profiled from DN 150 to DN 1200

Director, Chris Meredith says he has seen significant growth in the implementation of SRP EXP not only in the company’s home base of Australia but around the world. 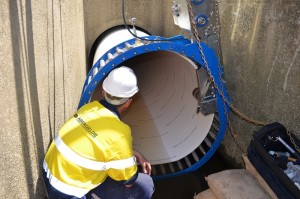 Protecting the integrity of public assets is second nature for Kembla Watertech, yet the task to renew a major stormwater pipeline running through Biggera Creek Flood Detention Basin on the Gold Coast was a first for Kembla’s experienced spiral wound lining team.

Kembla Watertech Project Manager Blaine Richards explains “The 1,200 mm diameter stormwater pipe runs through an important flood retention structure that protects hundreds of houses in the suburbs below, so ensuring the structural integrity of the pipe and of the dam wall was a major factor during the project planning and construction phase.

“By rehabilitating the asset now, even though it only had minor issues, it means that the asset, the community, and properties are fully protected from any threat of flooding.”

Kembla Watertech, as a leading pipeline renewal specialist, is celebrating its 20th year of operation. Kembla has… 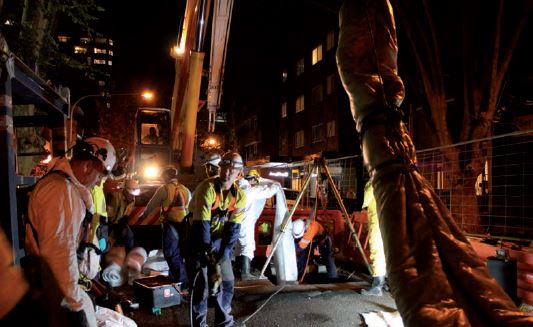 In 2009, Sydney Water contracted Kembla Watertech to rehabilitate a 67 m length of 990 x 660 mm oviform sewer main in Victoria Street. Crews worked in adverse weather conditions, great sewer depths, and close proximity to medium density residential areas, hostels, hotels and restaurants to complete what was considered to be one of the highest risk installations conducted worldwide, due to the depths and thickness of the liner.

In 2009, as part of a larger work program, Sydney Water contracted Kembla Watertech to rehabilitate a sewer originally constructed over 100 years ago. Access chambers at the downstream and upstream ends of the project were both greater than 22 m in depth. 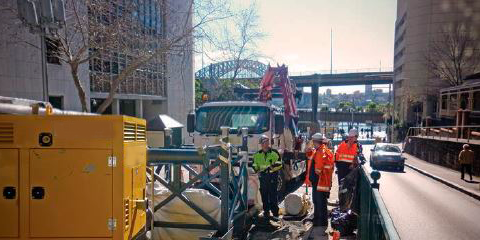 ARTICLE:
Bennelong Sewer reline – as big as it gets

Kembla Watertech recently took out the ASTT Rehabilitation Project of the Year Award for their innovative CIPP rehabilitation of the Bennelong Stormwater Channel on behalf of client Sydney Water.

Rehabilitation of this centuries-old system may have been the largest diameter CIPP installation in Australia – and one of the largest inversions ever in the world.

The project was significant because of the age of the system that was rehabilitated (more than 150 years old); the fact that it was the first oviform combined sewer/stormwater system constructed in Sydney; the density of the population surrounding it; the enormous size of the channel (perhaps the largest diameter CIPP lining installation ever conducted in Australia); the thickness of the liner (35 mm); and the fact that it involved one of the largest oviform inversions ever worldwide.

The project was… READ MORE